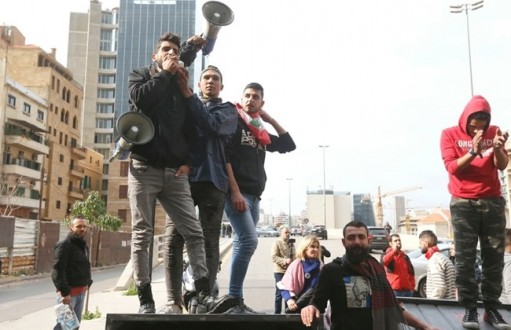 Violence briefly threatened to taint popular protests again Friday night as the Central Bank headquarters in Hamra was targeted by a handful of demonstrators late in the evening. Riot police from the Internal Security Forces quickly arrived at the scene but no scuffles ensued, in a stark contrast to the previous few nights. A photographer from Al Jadeed TV channel was injured after a stray rock, hurled by a protester, struck him on the head.

Friday marked the beginning of the fourth month of nationwide anti-government protests. Hundreds of thousands of protesters took to the streets on Oct. 17 demanding the fall of then-Prime Minister Saad Hariri’s government.

Hariri resigned days later, forcing the collapse of his cabinet, and protesters demanded and continue to demand a government made up of independent experts, away from the traditional political parties in power for the last three decades.

Prime Minister-designate Hassan Diab was close to forming a government in recent days, but political bickering has put his efforts on hold.

Protesters are also rejecting the leaked lineup of what they call a “government of advisers,” in reference to it comprising advisers to current and former officials.

Ramping up the pressure Friday, protesters blocked roads across Lebanon, including main highways.

Protesters gathered in front of the Parliament in Nijmeh Square Friday evening to demonstrate against “dividing up the spoils of the new government.” They carried umbrellas to keep off the rain.

Demonstrators also gathered in Al-Nour Square in Tripoli at night.

Dozens of demonstrators blocked Beirut’s “Ring Bridge,” parking cars on the highway, banging on drums and chanting, “The revolution is not over.”

“We’ve been stuck for over 90 days, the government needs to step aside so we can get out of this economic crisis. It has been three months, enough already,” Munya Kek, a 31-year-old protester at the Ring, told The Daily Star Friday morning. “I have hope of course, I wouldn’t be here if I didn’t.”

Demonstrators at the Ring Bridge Friday were later joined by dozens of doctors, who staged sit-ins at Hotel Dieu and St. George Hospital in Ashrafieh to draw attention to the nationwide shortage of medical supplies. The shortage is caused by Lebanon’s liquidity crisis, as well as the estimated $1.3 billion in dues owed to hospitals by the government.

“We have enough supplies for this month, but will run out next month,” a protesting oncologist told Al Jadeed TV.

In Metn’s Jdeideh, residents, students and activists marched to Jal al-Dib and then on toward Antelias, trailed by Lebanese Army soldiers and police officers directing traffic.

Roadblocks were erected in other areas, including along Jiyyeh Highway, the Dora road leading to Karantina, and several roads across the Bekaa.

Friday’s protests followed another night of outrage in Beirut’s Hamra neighborhood, where banks were vandalized for the third evening in a row, during what has been informally dubbed the “Week of Anger.”

Over 100 demonstrators were arrested by security forces during the week, and demonstrators, along with journalists, were beaten and tear gassed.

In a statement Friday, Human Rights Watch condemned the riot police’s use of excessive force, while caretaker Interior Minister Raya El Hassan told local media that an investigation into possible violations was underway. Hassan said Friday that investigations of security personnel are underway, amid violent clashes between them and protesters this week.

She affirmed that the Internal Security Forces are carrying out their duties within the legal framework, adding that any violations carried out by ISF personnel would be investigated by the forces’ leadership, and the appropriate actions will be taken accordingly.

Demonstrators had clashed with riot police Tuesday night in front of the Central Bank in Hamra, and many were detained at the Helou Police barracks.

Hassan added that protesters who were affected during these events can submit their complaints to Saliba.

On Thursday, she had apologized for the use of force against journalists, saying she took responsibility for security forces’ misconduct. 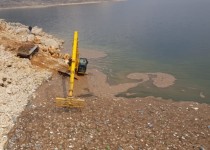 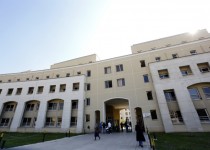 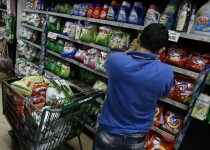