France to mobilize support for Lebanon 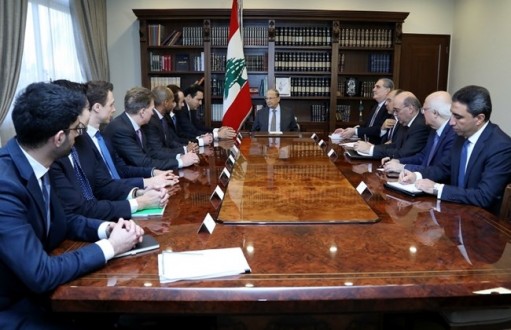 As Lebanon grapples with its worst economic crisis since the 1975-90 Civil War, France plans to convene a meeting of an international support group for Lebanon next week to drum up assistance for the protest-hit country, a Lebanese government official said Friday.

Meanwhile, parliamentary blocs are set to meet Sunday to decide their candidate for the premiership on the eve of binding consultations slated to be held by President Michel Aoun with MPs at Baabda Palace Monday to designate a new prime minister.

The consultations come more than a month after Saad Hariri resigned as prime minister under pressure of nationwide street protests against the ruling political elite that have jolted Lebanon since Oct. 17.

A European official said invitations had been sent out for the Dec. 11 meeting in Paris.

The Lebanese official said Saudi Arabia and the United Arab Emirates were expected to be invited.

“It is a meeting to attempt to mobilize assistance to help Lebanon deal with the acute crisis that it is facing,” Reuters quoted the Lebanese official said as saying.

The International Support Group brings together the United Nations, the governments of China, France, Germany, Italy, Russia, the United Kingdom and the United States, along with the European Union and the Arab League.

France last year hosted the CEDRE conference for Lebanon, where international donors pledged over $11 billion in grants and soft loans to shore up the country’s ailing economy and finance key infrastructure projects. However, the release of the aid was contingent on the Lebanese government implementing a string of structural fiscal and economic reforms.

One of the world’s most heavily indebted countries, Lebanon’s national debt has soared to more than $86 billion, over 150 percent of gross domestic product, according to the Finance Ministry.

Lebanon’s simmering economic crisis has been aggravated since the unprecedented popular uprising began, spiraling into a financial crunch that led banks to impose informal capital controls as dollars became scarce and the local currency weakened.

Prospects of a prime minister being designated helped the Lebanese pound to rebound. Dollars were being offered on a parallel market at 1,900 pounds Friday compared to 2,200 earlier this week. The official rate is 1,507.5 pounds.

As Lebanon faced an import crisis after weeks of political and economic turmoil and a dollar liquidity crunch, Hariri Friday requested assistance from friendly states to help the country secure imports, a statement from his office said.

“In the framework of his efforts to address the shortage of liquidity and to secure the basic import requirements for citizens, caretaker Prime Minister Saad Hariri sent letters to the leaders and prime ministers of a number of brotherly and friendly countries,” the statement said. “He asked them to assist Lebanon by securing credits for imports from these countries, thus ensuring the continuity of food security and raw materials for production in various sectors.”The messages were sent to Saudi King Salman bin Abdul-Aziz, French President Emmanuel Macron, Russian President Vladimir Putin, Egyptian President Abdel-Fattah al-Sisi, Turkish President Recep Tayyip Erdogan, Chinese Prime Minister Li Keqiang, Italian Prime Minister Giuseppe Conte, and U.S. Secretary of State Mike Pompeo, the statement added.

Importers of fuel, medicines and wheat have all warned of shortages if the situation persists. The Central Bank said in October that it would facilitate access to dollars at the official rate for importers of those commodities. However, gas station owners have staged strikes and hospitals have threatened to stop admitting patients.

Speaking to a delegation of British and American financial institutions at Baabda Palace, Aoun said the formation of a new government would help unlock the funds decided at CEDRE to finance development projects.

“The binding parliamentary consultations will take place next Monday, to be followed by the formation of a new government. This will help Lebanon’s friends to continue the path of the CEDRE conference and launch development projects that had been decided there,” Aoun said.

Aoun assured the delegation that fixing the dire economic and financial situation would be a priority of the new government. He said the outgoing Cabinet had approved an economic blueprint in October designed to revitalize the Lebanese economy and transform it from “a welfare economy into a productive economy.” Referring to Lebanon’s potential offshore oil and gas reserves, Aoun said: “The oil and gas drilling will begin in January. This will put Lebanon, when the [oil] extraction operation begins, within the oil-and gas-producing countries.”

Last month, the French hydrocarbon company Total announced that the company would start exploring for oil and gas in Lebanese waters between December and January. The drilling will take place in offshore Block 4 for around 60 days. In February 2018, Lebanon signed its first offshore oil and gas exploration and production agreements for Block 4 and Block 9.

Even before protests began, economic growth had stalled, following repeated political deadlock in recent years. The economic malaise has also been compounded by the war in neighboring Syria.

The World Bank has warned of an impending recession that may see the proportion of Lebanese people living in poverty climb from a third to half the population. Unemployment, already estimated to be above 30 percent for young people, would also increase, it has said.

The Syndicate of Owners of Restaurants, Cafes, Night-clubs & Pastries in Lebanon has said that 265 establishments have closed since the protests began in early October, and warned that this figure could rise to 465 by the end of the year.

Meanwhile, businessman Samir Khatib remained the favorite candidate to be nominated for prime minister by the majority of blocs during Monday’s parliamentary consultations.

The Future Movement’s parliamentary bloc is set to meet under Hariri Sunday to endorse Khatib’s nomination for the premiership, a political source said.

Other blocs are also set to meet Sunday to declare their positions on whom they support for prime minister. Former Premier Najib Mikati, who heads a four-member parliamentary bloc, said Thursday his bloc would nominate Hariri to head the new government.

Hariri, who withdrew his candidacy, had announced his support for Khatib’s candidacy for prime minister.

Local media outlets said that protesters, who had rejected Khatib’s nomination and his proposed techno-political government, were planning to gather Monday on a road leading to Baabda in an attempt to prevent lawmakers from reaching the presidential palace and subsequently, thwart the consultations on naming a prime minister.

With Hariri insisting on bowing out of the premiership, the Free Patriotic Movement, the Amal Movement, Hezbollah, the Consultative Gathering and the Marada Movement were expected to nominate Khatib for the job.

The LFs’ parliamentary Strong Republic bloc said in a statement Thursday night its MPs would participate in the parliamentary consultations, but would not nominate any candidate. It said the decision was made after the protesters’ demand to form “a government of independent technocrats, who are not influenced by the regime elite, had been ignored.”turn 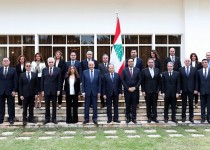 The Daily Star Five new ministers in Prime Minister Hassan Diab’s 20-member Cabinet were sworn in Friday. New Energy Minister Raymond Ghajar said that his work at the ministry would be in line with that of his predecessor. “We have to continue what minister [Boustani] has achieved in less than a year,” he added at the handover ceremony. He said ... END_OF_DOCUMENT_TOKEN_TO_BE_REPLACED 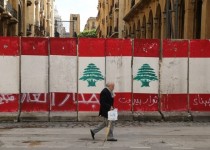 Hussein Dakroub – The Daily Star The Word Bank Friday offered to help Lebanon overcome its economic crisis, the worst in decades, as Prime Minister Hassan Diab pledged to gain internal and external confidence in a bid to encourage international donors to extend financial aid to the cash-strapped country. A World Bank delegation, headed by the regional director for the ... END_OF_DOCUMENT_TOKEN_TO_BE_REPLACED 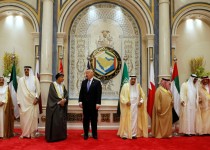